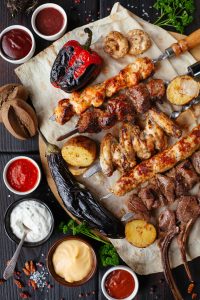 You don’t have to live in Phoenix or Anthem, AZ, to have heard of the Paleo diet. Just what is the Paleo diet and what are the pros and cons of following it? First, Paleo stands for Paleolithic, it’s the diet that scientists believe the people in the Paleolithic era ate. The diet is also described as the Caveman diet. People who follow it say that it is the food our bodies were made to consume. Our body was genetically programmed to digest the food and use the nutrition. Since it’s the diet of early man before farming, many common and often considered healthy foods are eliminated.

Some foods on the Paleo diet may be inconsistent with early man’s diet.

While many people who choose the Paleo diet may focus on meat, cavemen didn’t.

One of the fallacies of this diet is the focus on meat. Studies show that early man was an omni Varian—ate both meat and vegetables—but the diet leaned heavily toward the vegetarian side. This focus on fatty and red meat can lead to higher levels of the bad cholesterol—LDL. It also can increase the risk for colon cancer by as much as four fold. A low carb diet can also affect your workout, causing you to tire too quickly. Finally, by eliminating dairy and grains, it could lead to deficiencies in fiber, calcium, selenium, magnesium and iron.

What’s the benefits of the Paleo diet?

As long as you’re limiting your intake of meat, the Paleo diet may not be so bad. The food you eat is healthy and free of preservatives, added sugar and chemicals. The plants, vegetables, nuts, seeds and oils increase the anti-inflammatory benefits to your body. If you’re eating more red meat, and have no cholesterol problems, you’ll get more iron. The reduction of simple carbs and increase of fat and protein will help you feel full faster and aid in weight loss.